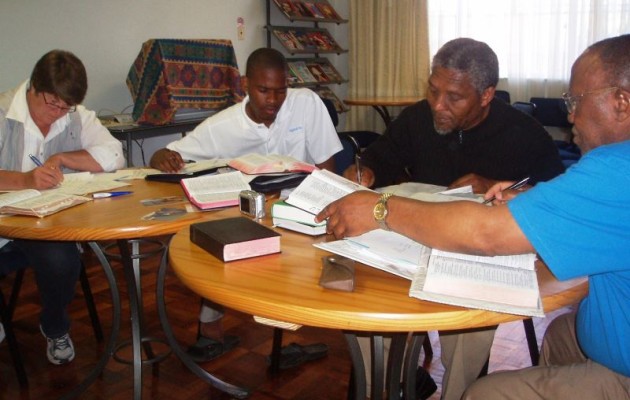 that “the Jacob Zuma Foundation has partnered with the Roman Catholic Church to improve the existing translation of the Bible into isiZulu.”

The project “Biblia Zuluensis – iBhaybheli ngesiZulu” was started in 1996 and is run by a team of altogether 15 men and women – volunteers from different parts of South Africa – translating directly into their mother-tongue isiZulu the books of the Hebrew bible (the Biblia Hebraica, commonly known as the “Old Testament”) and the books of the Greek bible (the Testamentum Novum Graecae commonly known as the “New Testament”), using the `functional equivalent method´.

Our team is ecumenical.  We are men and women from the various church-denominations throughout KwaZulu-Natal, Mpumalanga, Gauteng, Free State and the Eastern Cape – Roman Catholics included.

We solicit or receive no donations or funding from any church-, state- or political institution or individual whatsoever.  Members of our Team of Volunteers carry every occurring expenditure themselves and pay out of their own personal means.  Biblia Zuluensis maintains integrity and independence in financial and ideological matters – first and foremost by remaining free from Sponsors in every respect.

Biblia Zuluensis supports the Bible Society of South Africa and works with individuals and groups from church-congregations and other interest groups in different communities.  Our Team of Volunteers holds its annual workshop in a different venue each turn – in September 2010 we met in the conference-centre at the St Joseph Cathedral in Mariannhill.

We read for the first time about a “Bible translation project in Mariannhill” in March 2014; I wrote to Bishop Dlungwane on 15.03.2014 suggesting that a delegation from our Team of Volunteers meets him and others to hear more to what is said to be underway. No reply has come as yet.

Biblia Zuluensis proceeds with our voluntary and ecumenical teamwork at grassroots and hopes to present the results, “iBhaybheli ngesiZulu”, shortly.  See how far we already are and stay in touch >> www.biblia-zuluensis.de